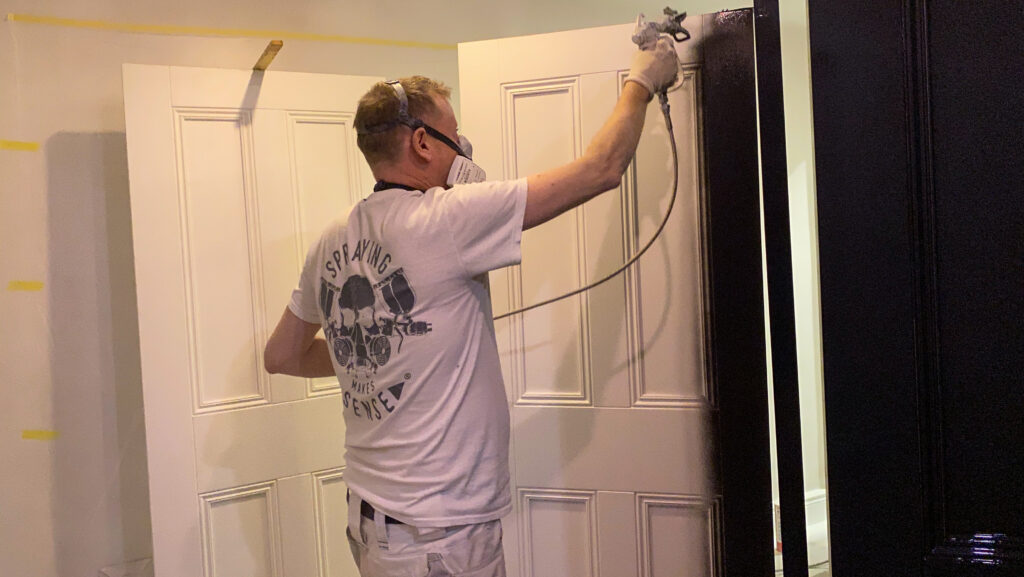 How Much Time can be Saved with an Airless Paint Sprayer?

Spraying is an interesting area of work because everyone knows what spraying is and can conjure up a picture of a sprayer. Usually, this picture is a classic compressor and spray gun that a car sprayer uses to spray cars.

There is no air used to turn the paint into mist. An airless sprayer is a pump that sends the paint down a single hose at high pressure. The spray gun has a special tip that is a tiny hole (typically less than half a millimetre).

When the paint hits the tiny hole at really high pressure, it turns into a mist, and you have your sprayer. It would be difficult to spray a car with it, though, it is more useful for spraying houses and commercial buildings.

The most significant advantage of airless spraying is the speed of application. We will discuss this in more detail later in the blog.

Airless sprayers have been around since the late fifties, and they have been used extensively by decorators in the States for many years. Why have they not taken off in the UK? I think it is the lack of decent training and education. Two things have happened at the same time. The spray equipment has become smaller and more affordable, and people are sharing their results on social media.

One of the main reasons decorators are getting into airless spraying now is the speed. When people ask us how much faster a sprayer is compared to a roller, it is very difficult to give a simple answer. This is sometimes interpreted as meaning that we don’t know, but that’s not the case. We will discuss a number of real-life situations that have happened on real jobs to give you an idea of how spraying compares to brushing a rolling.

How long would it take by brush and roller?

Job number 1 – A simple task to look at is painting a door. It is easy to visualise and it easy to compare times.

On average, it takes about 10 minutes to paint a door by brush. This is quite a pace, and if you were painting, say 50 sides, you would struggle to keep that pace going. Looking at one door is never a fair comparison.

When people discuss spraying, they always focus on the masking as if they never protect anything when painting by brush and roller. This was a real job which we are discussing and for this job the doors were removed because they were being fitted with new hinges and door furniture.

There were 25 doors painted on both sides with 5 coats of paint. The preparation, filling and sanding are the same for both methods, so I will not discuss these here.

Brushing – at 10 mins a side, 50 sides would take just over 8 hours, with no breaks or dinner. It would be more like a day and a half on a real job because you would get fed up with painting doors on the first day around 3 o’clock.

This is 16 times faster. We know this is hard to believe. This just shows that if the conditions are good for spraying, then the speed can go through the roof. We rarely quote these kinds of numbers because people simply do not believe it.

This one is more complicated to get brush and roller times and spraying times. We have done a lot of this type of work, and we do have some data on many aspects of the work.

First, as an example, we did several student apartments (100’s over the years). Typically, the work was over 6 floors, and each floor had 15 apartments (single rooms), 3 corridors and 3 communal kitchens.

The single rooms were organised into “flats”, and a flat had 5 rooms, a corridor, and a kitchen. A floor had 3 flats.

A single flat was 50m2 of walls and ceiling area. A floor had 15 of these, so that’s 750m2. For simplicity, I am going to ignore the corridors and kitchens.

It is worth just getting your head around those numbers just to understand how the speed of the sprayer turns into profit. I am not going to talk about filling and preparation because this would be the same if you rolled it.

Spraying took 1 day to apply 2 coats (it covered in two) to all 15 rooms. This is 4 times faster.

“4 times faster” is a much-quoted number and is a good average to use as a rule of thumb. Don’t forget, though even twice as fast is amazing and would mean twice as much money earned.

What about masking, I can hear you say? On this job, the carpets had been removed as they were being replaced, and the furniture was ripped out as this was being replaced as well, so there was minimal masking to do.

Job number 3 – This was part of the student apartment job, but I had more reliable roller information on these because we rolled them for about 3 years.

Each apartment had an ensuite bathroom. These were only small, and we decided that it was going to be quicker to roll them, mainly because of the masking. We did this for 3 years, and we did 100’s of them. It took 20 mins to roll out one, and each one needed 3 coats to make it cover, so that’s an hour per bathroom.

Then one year, we decided to spray them. This time I asked the decorator who was masking to time himself and not just masking 1 bathroom but the whole floor, 15 bathrooms. The time came back, and it took him 6 mins per bathroom. He was quick, and he had done a lot of masking over the years. It took us a minute a coat to spray, and it was covered in 2 coats.

8 minutes! So let’s round that up to 10 mins per bathroom to allow for demasking.

This is 6 times faster than rolling on a room that should be easier to roll. It was an eye-opener because even we did not expect this result.

Here are three real jobs with real times. We discuss timings a lot with decorators, and very often, we get the response that with a big, massive roller working at breakneck speeds sprayer could be beat. However, would you really want to do this, and could you keep it up.

An Olympic cyclist can ride around 45 mph, so in theory, they could race a car. But would you want to? How tired would you be? Could you keep that pace up for long?

In theory, there are superstar decorators out there that achieve massive feats of speed with a big roller, but with a sprayer, an ordinary decorator can do it with little effort.

Another response we get from decorators is simple disbelief.

They do not believe you at all. When we get decorators on our courses, and they see for real how fast a sprayer can go and how little overspray and effort this takes, they then believe the numbers. I can understand decorators wanting to see it for themselves before they believe it, and I think this is one of the advantages of doing a course.

Finally, what many people do not consider is that they will get better in time. When they first start spraying, they are slow and clunky because they are learning. However, they are fast and slick at rolling because they have done it for many years. We have found that over time, you will get faster and faster with the spraying. On the student apartments, we were twice as fast with the spraying after 5 years of doing it.

There are many resources that could help you, but here are some of the best we could find for you.

It’s my first time using an airless sprayer where do I start?

If you are reading this and your thinking, “Yeah I need to start doing this”, then your next thought is going to be “, where do I start?” The easiest and cheapest place to start is to read our “simple steps to airless spraying”, and this will step you through the process of getting going with the sprayer.

The next thing to do is do a course. We offer a 2 day “Intensive airless course” which will take you from complete beginner to confident sprayer. We will also look at the best sprayers to spend your money on so that you don’t waste your money. We advise that you do the course first before buying a sprayer and before using a sprayer.

You need to know a few health and safety implications with an airless sprayer. If you decide that you want to go for it anyway before a course, then at least check out our FREE airless safety course.

The course will cover how the sprayer works and all the accessories that you can use to make your spraying experience easier. You will go into the workshops and spray emulsion on ceilings and walls. Then on the second day, you will spray all day. You will spray skirtings, doors, architraves and spindles.

Once you have done the course, you can get yourself a sprayer and start spraying. We offer ongoing support once the course is complete in the form of a private Facebook group for people who have done the course and need questions answered as they happen on a job. Our students find that this service alone is worth doing the course for. Having someone to hold your hand for the first few jobs is invaluable.

Other posts that may be of interest: 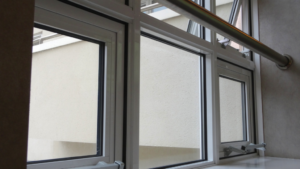 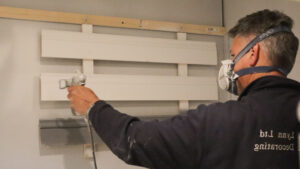 Ditching the Brush in Favor of Spraying – Statistics 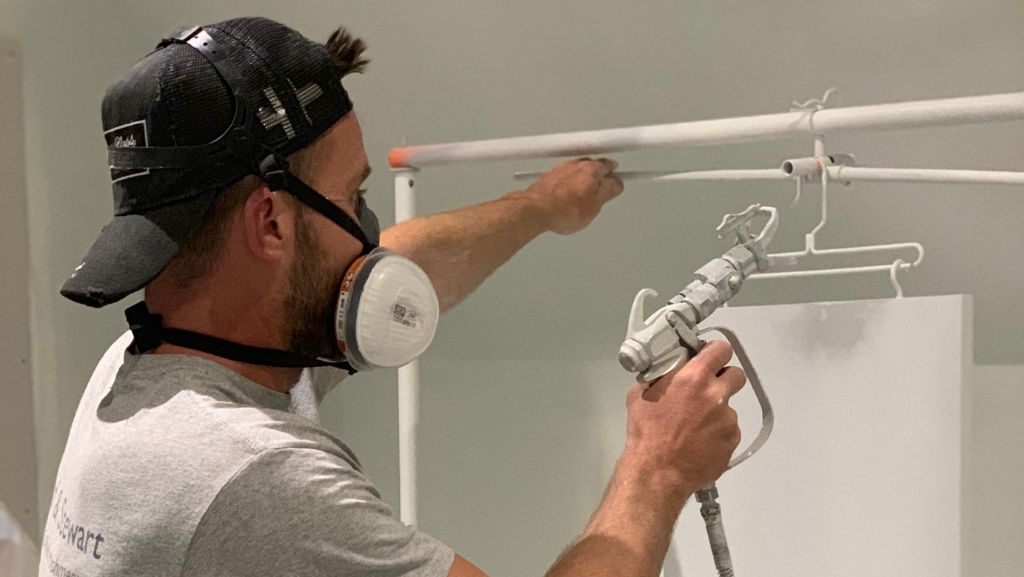 CITB – Grants and funding for painters and decorators